Tubes Made from Sugarcane Resin Provide a Green Option

There are many cosmetics and beauty formulations and products made from natural and organic substances. However, when they are packed in conventional polyethylene made from petroleum, the packaging is at dissonance with the green message and mission of the manufacturers and consumers. Now, a few tube manufacturers have been working proactively to develop green or environmentally friendly packaging options. 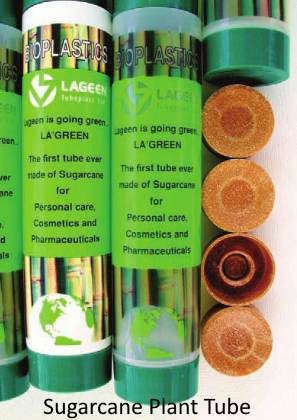 Sugar Cane tubes are cosmetic tubes made from sugarcane. The sugarcane is fermented, distilled, and pollinized to produce a polyethylene that has the same properties as polyethylene made from petroleum. It can be used by manufacturers in the same way as they would conventional polyethylene. There is no difference in the properties of the tube and in the assembly line and filling procedures or time.

Advantages of Sugarcane Based Tubes

Studies have shown that sugarcane absorbs carbon dioxide at a faster rate than many other trees and plants and fixes it in the soil. Moreover, carbon dioxide is not released by this plant when it withers or is harvested. The efficiency of sugarcane as a carbon sink makes it an ideal plant for use in the manufacture of green tubes.

Other Measures to Make Tubes Greener

While the sugarcane based tube is the latest method of making tubes environmentally friendly, cosmetic packaging suppliers are focused on producing a greener product. Manufacturers are working towards reducing the gauge and weight of the plastics used for tubes as well as making the tubes optimal for shipping, ensuring they occupy less space. These steps were always taken before manufacturers expressed an interest.  Tube suppliers believe in producing improved and greener tubes that will attract the attention of manufacturers looking for superior products.

Cosmetic tube manufacturers do not believe in resting on their past successes. Instead, further innovation has resulted in a tube made from renewable sugarcane with a cap made from wood fiber compound mixed with traditional polypropylene. This wood plastic compound is a renewable one that ensures that the tube and cap are both environmentally friendly. With a wood fiber content of around 50 percent, these caps can be used with both the new sugarcane based tubes and traditional tubes.

Another green plastic being tested for tubes is called post-consumer resin or PCR. Many manufacturers are in the process of testing this material for stability with their products. If successful, these PCR tubes offer manufacturers another avenue for making their packaging green even as they sell their natural and organic products.

In any case, tubes use less plastic than bottles, so even if the manufacturer selects conventional plastics for packaging, tubes are a greener choice.

Disclaimer: This publication is not sanctioned or approved by any manufacturer or trade name listed. The Whole Package, LLC. is not an authorized distributor or representative for the following manufactures: Kalix®, Norden®, IWKA®, Unipac®, Axomatic®, Tonazzi®, Comadis®, Prosys®.
See our legal statement for more information.